Motown arrived at Sutton Coldfield Town Hall last night in the shape of “In The Name Of Love – The Diana Ross Story” The first half of the show concentrated on the history and hits of the Supremes with the young Diana Ross being played by Cherie Jade who had all the mannerisms and moves of Diana down to perfection. It was truly like stepping back in time to an early Supremes concert. After the short interval we were treated to what can only be described as A Diana Ross concert. Tameka Jackson who plays Diana in the second half not only sounds like her but looks like her, along with her interaction with the audience within minutes the front of the stage was packed with people dancing and singing along including yours truly whilst trying to capture the atmosphere on camera This is truly a magnificent show and I urge anybody who loves Motown, The Supremes and Diana to get a ticket and go see the show.

The boys from “Oh What A Night” returned to Sutton Coldfield Town Hall. . Featuring the classic hits Frankie Valli and The Four Seasons, they did not disappoint the full house. The audience lapped up the wonderful vocals and slick dance moves and total energy and nostalgia of this fantastic show.

Picture Credit ©Lee Williams for Whats On In Sutton Coldfield

The shows are back and the Town Hall is in full swing again. Legally Blonde is the first Am Dram show to be  performed at the Town Hall since the outbreak of the pandemic when everything was cancelled.

This is a wonderful production by Tudor based on the hit films staring Reece Witherspoon as Elle Woods, it seems as if she has been transported into the persona of our lead played by Katie Milligan

Elle Woods appears to have it all. Her life is turned upside-down however, when her boyfriend dumps her so he can start getting serious about his life and attend Harvard Law. Determined to get him back, Elle uses her charm to get into Harvard Law. At school, she struggles with peers, professors and Warner. With the help of Paulette and Emmett though, Elle quickly realises her potential and sets out to prove herself to the world.                             (Warner – Alan Rowe, Paulette – Natasha Cartwright, Emmett – Ben Foulds, Elle – Katie Milligan)

There is so much joy and enthusiasm on the stage the routines are slick and well performed, vocals strong and clear and a superb supporting ensemble.  I have to admit to have never seen the film or show before and I throughly enjoyed it, during some of the musical numbers it makes you feel like joining in.

Some tickets are still available 👇 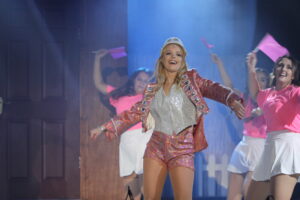 Back in 2018, Down for the Count wowed audiences at Sutton Coldfield’s Concerts in the Park, supporting the City of Birmingham Symphony Orchestra in front of 4,000 people.  Now they are returning to Sutton Coldfield Town Hall on Friday 24th January with their theatre show SWING THAT MUSIC.

The show evokes the atmosphere of the ballrooms and jazz clubs of the swing era – combining top class musicianship with authentic dance performances from local Lindy hop dance group, The Swing Era.

Described as “one hellova celebration of vintage music” by TimeOut London, the SWING THAT MUSIC show breathes new life into some of the best music of the 20th Century, treating audiences to joyous instrumental solos, sublime vocal performances, energetic dance routines and Down for the Count’s irresistible humour and on-stage banter.

Expect to hear songs from the likes of Duke Ellington, Benny Goodman, Count Basie and Glenn Miller, and classics from singers such as Louis Armstrong, Ella Fitzgerald and Nat ‘King’ Cole.

SWING THAT MUSIC has had a string of sell-out shows in 2019, at venues including the world-famous Ronnie Scott’s Jazz Club in London, and the tour marks the release of Down for the Count’s new album, also called SWING THAT MUSIC. The album is available to buy from the band’s website www.dftcswingorchestra.co.uk. Band leader Mike Paul-Smith describes the album as “a celebration of my favourite musicians and singers from the Swing Era. At that time young people were cramming themselves into ballrooms to listen and dance to incredible music from pioneering musicians – and our album and show aims to recreate that energy and sound.”

The band was formed by Mike Paul-Smith in 2005 whilst he was still at school. “We always loved playing jazz and soul music, but it was when we started getting asked to play for swing dance events that we really started to love the big band music we play nowadays. It’s such a thrill to see people interpret the music you play through dance, and it wasn’t long before I began taking Lindy hop dance classes myself. Because the band started when we were so young, we’re only in our late 20s and early 30s now – and we find that audiences are often surprised to see people of our age playing vintage music. It’s great that Swing dancing has become increasingly popular with younger people too.”

Since then, Down for the Count has become a favourite amongst fans of retro nostalgia, making regular appearances at events such as Twinwood Vintage Festival, who described them as “a breath of fresh air on the swing scene”. The band are regulars at London jazz clubs and have even performed at the oldest jazz club in Europe, Le Caveau de la Huchette in Paris, which featured in the film La La Land. The band includes award-winning jazz musicians and West End performers, who have performed at events across the globe.

The format of the band’s show means that no two performances are ever exactly the same. As Mike said, “we make sure our show is entertaining, bringing our own humour and personalities to the stage, recreating the atmosphere of swing era dance nights and jazz clubs so that every moment feels spontaneous and exciting. Ultimately the music is the star of the show, and we want audiences watching and listening to feel as uplifted as we do when playing. We hope our joie de vivre is infectious and that audiences leave sharing our love for all that swings!”

The band’s new single Swing That Music can be found here:

I am new to “The Mint Theatre Company” a pop-up theatre group who perform their shows in unlikely venues such as village halls, church halls. I will say now Im a new recruit to their following and will definitely be going to future productions.

Their latest production “popped up” in what I believe is a new venue Wylde Green United Reform Church Hall. Although it has a stage that is about it, and that it’s self is pretty small with very little space for props to be stored until required, no stage lighting to add that ambiance. As always what scenery, props etc need to fit in the back of a car to be taken to the next venues.

The show is a take on the “The Christmas Elves and the Shoemaker” tale given a seasonal twist by director Liz Daly to deliver a festive family tale full of morels and a charm of its own, the basic message is it is better to be kind and help others than to be selfish and nasty.. and I’ll drink to that !

Our story starts in Santas workshop, where Santa is demanding the Elves work harder and longer hours to get everything ready for Christmas. This sparks our stars Sage (played by David Stonehouse) and Onion into action, Onion (wonderfully played by Alex Howell) being the shop steward for the National Union of Elves citing elf and safety and organises a mass walkout well two man walk. We then follow Sage and Onions adventures in the real world helping Peter the shoemaker (played by Ian Toulouse) who is struggling to pay his rent by creating shoes whilst he is asleep and the all the repercussions that produces.

We are treated to a number of classic pantomime routines, amusing the adults and bringing laughter from the children. With this being a story about Elves and Shoemakers we are treated to a number of appearances from the like of Lady Mariah of Carey  played by Charlotte Ball who gives us a wonderful rendition of “All I want for Christmas is Shoes” we also meet Nancy Shoenatra (played by Liz Daly) who manages to entertain us with…yes “These Boots Were Made For Walking” and finally Elfis (played by David Daly) treating us to plenty of Elfish puns and songs including…”Blue Suede Shoes” you can see a theme appearing can’t you?  we are also treated to some lovely tap by Ellie Ball who happens to have happy feet and is also “Rocking around The Christmas Tree”

Although it was a small audience the cast did a fantastic job filling the hall with enthusiasm  and plenty of feel good factor.

This was a fantastic production and wonderfully and enthusiastically delivered, I would recommend any families looking for a pre Christmas laugh and treat to go along to one of the next performances at either Shenstone Village Hall on Friday, 29 November and Stonnall Village Hall on Saturday, 30 November.

Northern Live – Do I Love You